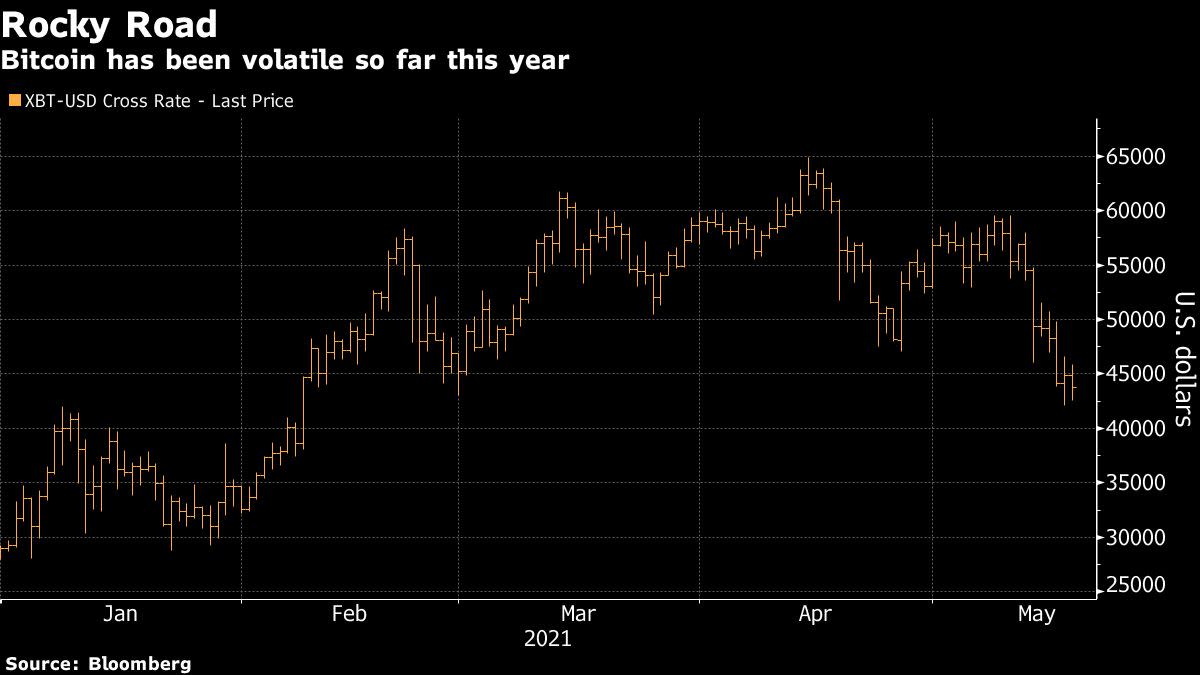 (Bloomberg) — Bitcoin and other major cryptocurrencies slumped after the People’s Bank of China reiterated that digital tokens can’t be used as a form of payment.

The largest token fell as much as 2.3% to $42,309 in early Asian trading Wednesday, continuing a weeklong slide sparked by Elon Musk’s back-and-forth comments on Tesla Inc.’s holdings of the coin. Ether, Dogecoin and last week’s sensation, Internet Computer, also retreated.

“This is the latest chapter of China tightening the noose around crypto,” said Antoni Trenchev, managing partner and co-founder of Nexo in London, a crypto lender.

Virtual currencies should not and cannot be used in the market because they’re not real currencies, according to a notice posted on the PBOC’s official WeChat account. Financial and payments institutions are not allowed to price products or services with virtual currency, the notice said.

“They just want caution,” said Bobby Lee, founder and chief executive officer of crypto storage provider Ballet. “They feel the market is over-hyped, there’s speculative trading, they’re looking out for the best interests of the people.”

Beijing since 2017 has abolished initial coin offerings and clamped down on virtual currency trading within its borders, forcing many exchanges overseas. The country was once home to about 90% of trades but the lion’s share of mining and major players have since fled abroad.

China has recently taken steps to issue its own digital yuan, seeking to replace cash and maintain control over a payments landscape that has become increasingly dominated by technology companies not regulated like banks.

Many chartists and technical analysts are looking at Bitcoin’s 14-day Relative Strength Index (RSI), which entered oversold levels Tuesday. In addition, an acceleration in its selloff could mean the coin approaches its next support around $40,000. A fall to that level would mark the first time since September that Bitcoin would test its average price over the past 200 days. And breaching it could mean it drops to $30,000, where it’s previously found support.

For Stephane Ouellette, chief executive and co-founder of FRNT Financial, the moves have more to do with Musk’s recent tweets about Bitcoin.

“It’s just a bit of a mess. TSLA’s entrance into the space saw some of the most aggressive BTC buying I’ve personally ever seen — and it has to unwind,” he said. The EV-maker’s retraction that it will accept Bitcoin as payment “was the catalyst that accelerated the spread consolidation. Then over the weekend, little comments here and there have continued to confuse.”

Meanwhile, the latest Bank of America fund manager survey showed that “Long Bitcoin” is the most crowded trade in the world right now. The poll captures 194 fund managers with $592 billion worth of AUM overall.

“The fact that the BofA manager survey shows that the ‘long Bitcoin’ trade is the most crowded one on the Street right now isn’t helping either,” said Matt Maley, chief market strategist for Miller Tabak + Co. “When an asset becomes the most crowded trade in the BofA survey, it has frequently signaled a near-term pullback in the past. When you combine this with the news out of China, it’s not a surprise that Bitcoin is seeing some more weakness.”

(Updates prices from the second paragraph.)

Subscribe now to stay ahead with the most trusted business news source.