Lilium is developing technology for an electric future —… 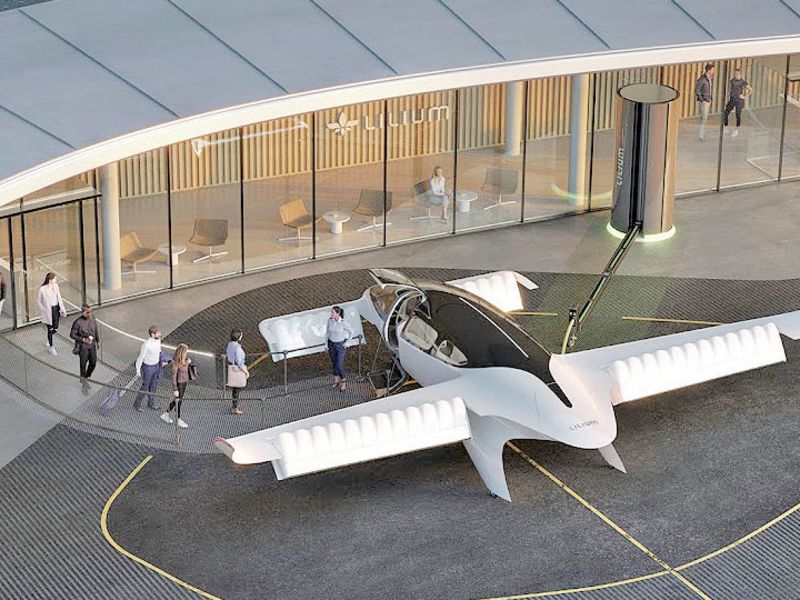 What if one German electric aircraft company told you that industrywide goals to “go greener” could translate from the road to the sky?

Lilium is developing a seven-seat personal electric vertical takeoff and landing jet, or eVTOL (EE’-vee-tole), in the hopes of spearheading the future of electric aircraft.

It’s also developing its own high-tech vertiport landing strips in Florida — and that’s just the start.

“Our vision is to create a sustainable and accessible mode of high-speed travel and bring this to every community,” Lilium CEO Daniel Wiegand said in a statement. “Transport infrastructure is broken. It is costly in personal time, space consumption and carbon emissions.”

Lilium is pursuing the electric jet technology because it will bring more capability to aircraft “with lower cost per seat mile while delivering low noise and low emissions,” Wiegand said.

Lilium, founded in 2015, announced in March that it would go public in a $3.3 billion deal via special-purpose acquisition company Qell.

Leading Qell Acquisition Corp. is Barry Engle, a former General Motors North America president, who has said he’s interested in sustainable mobility and is confident in the Lilium Jet.

“A lot of times people talk about flying cars or air taxis, if you will,” Engle said on an April episode of the Automotive News podcast “Daily Drive.” “It doesn’t do justice to what this product is. It is a highly engineered aircraft. In terms of the form factor, when you think about it, essentially, it’s a business jet, and it happens to take off and land vertically.”

The jet has a 45.6-foot wingspan and is nearly 28 feet long. Fixed wings and no tail boost the jet’s cruising efficiency, according to Lilium.

The Lilium Jet, for which commercial operations are planned for 2024, also has a 155-plus-mile range and is able to cruise at up to 10,000 feet at 175 mph. The technology expands upon Lilium’s five-seater concept, first demonstrated in May 2019.

The jet uses 36 electric ducted fans with integrated acoustic liners to keep its noise level low. The fans are embedded into the wings.

The company ultimately envisions connecting towns and cities between 25 and 125 miles apart, calling this “regional air mobility” instead of “urban air mobility.”

“We do see this company being at the absolute forefront of this really exciting new industry,” Engle said. “It’s not very often that you see an opportunity to create a market that large and then find a technology and a company that has an opportunity to differentiate itself and be one of the leaders.”

The jet technology is one thing. Preparing the necessary infrastructure is another.

Though Lilium can use existing helipads because of its ducted fans, the company also plans to build its own infrastructure for landing, recharging and takeoff. Lilium is building a network of vertiports across Central and South Florida.

Lilium says the network will span 186 miles, with the goal that most of Florida’s 20 million residents will live within 30 minutes of a vertiport, allowing people to live farther outside city centers, commute more easily and approach their transportation options differently.

The company said in January that it is partnering with the city of Orlando, design agency Tavistock Development Co. and infrastructure provider Ferrovial Airports to develop at least 10 vertiports in major cities across the state.

Outside the U.S., Lilium is working on developing a network between Düsseldorf and Cologne Bonn airports in Germany.

“The addressable market of this opportunity is huge,” Engle said. “The real competition for this aircraft is long, boring car rides.”

Bitcoin resumes sell-off over weekend, falls below $32,000 – CNBC
Cryptocurrency – Is it worth including in your portfolio? – Business Standard

Apple’s next big technology was…

This grid technology could make…